Led by the duo of designers Golnar Roshan and Ruben de la Rive Box, Design & Practice is an Amsterdam based design studio specialised in branding, graphic design and art direction for clients in the cultural, creative and interior sector. We had a talk with them on their creative process, inspired by their artist practice under the name Rive Roshan, their view on the creative industry, as well as their work on the new Olin visual identity.

Led by the duo of designers Golnar Roshan and Ruben de la Rive Box, Design & Practice is an Amsterdam based design studio specialised in branding, graphic design and art direction for clients in the cultural, creative and interior sector. We had a talk with them on their creative process, inspired by their artist practice under the name Rive Roshan, their view on the creative industry, as well as their work on the new Olin visual identity.

Could you tell us a bit more about your agency?

Golnar Roshan: You could say we are a studio specialised in creating for a creative audience, as a lot of the work we do is aimed at creatives themselves.

Ruben de la Rive Box: We both come from similar backgrounds: I've studied interaction design, and Golnar has studied visual communication, and we've always worked within companies that were part of the creative world. Although working for the creative industry is still sort of a niche, it is increasingly becoming a powerful part of our collective culture. Some of the biggest and most influential companies in the world have creativity as their core driver of value. Creatives have gone from being a relatively minor part of the general economy, to driving culture in a very impactful way.

How would you define your way of working?

RR: In a way, our ambition is in the name. We're very focused on starting from a design perspective and then always paying attention to the quality of our practice.

GR: We also design from the perspective of experience and immersion. We want people to be able to relate to a brand that has a feeling, a true personality. When we worked on the identity of Le Drugstore in Paris we immersed ourselves for months completely in the DNA of that place and its historic context, so that the brand identity would reflect the true ‘identity’ of the place and be a natural extension of its interiors, the food and the surroundings. Identity of Le Drugstore in Paris by Design & Practice.

Does working for creative people influence your work?

RR: What we find really fun about working with other creatives is that on the one hand they are quite critical and precise, but at the same time, they are open to challenging ideas. Our work for Tom Dixon is a good example of that. When creating the material box for him, the real challenge was to make it exciting and reflective of the soul of Tom. So, we designed it to feel like a hybrid between a mid-century Louis Vuitton travel suitcase and a rugged oily toolbox from a bike repair shop. Because we saw that contrast in Tom Dixon, we felt a sales tool should reflect that character too.

Do you believe that all brands are expected to be creative today?

RR: I do think it is a movement. We went from the industrial economy in the 70s/80s to the service economy, then we went from the service economy in the 90s, to the information economy, and now that we have all this information, we need to figure out what to do with all of it, how to make it understandable, and attractive to people, and that requires creativity, so yes, I believe we are now in a creative economy.

Another trend that's at the centre of your work is materiality and tactility, do you want to talk about that?

GR: That's a really important part of our work because I think we're quite intuitive people, we like to experiment with materials. At the core of our practice is the belief that if you allow someone to fully experience something, and genuinely connect with that, they will remember it and it will become part of their lives. I think tactility plays a really big role in that. There are so many nerves in our fingertips that are directly connected with our brain. We naturally care about materials, the connections they create when you open something, the way they feel, or sound. We really believe that the ultimate way of giving meaning to something is to bring all those points together and make these connections.

You worked on the new Olin identity, what was the challenge with that project?

RR: Our starting point was that today, almost every choice that's being made in the process of a big printing project is made by a designer or at least championed by a designer. So, we really wanted to focus on that audience, and to make sure that they felt an aspiration to work with the paper. We are targeting a very critical audience. We felt like on the one hand we needed to make something that would have an impact, with presence and expression and at the same time, we needed to leave it very simple and open so that the minute designers feel engaged with Olin, the next thing they do is actually imagine their own ideas onto that paper.

GR: From there, we played with the idea of a canvas. Paper is a canvas, and the new identity became one too. We took the "O" of Olin and turned it into a circle. Whatever happens within that circle creates that global creative platform, for everyone who comes in contact with it. That’s how the circle became the frame for all the tools. It also applies to the art that gets put onto the paper, which could be anything, from typography to photography, and anything in between.

Can we describe the new Olin identity as minimalist?

RR: One thing that we talk about often is warm minimalism, because we feel that minimalism is a meaningful thing that has happened to our culture, it has created a lot of freedom. The only thing is that sometimes we feel that it leads to something overly rational and it can strip away too much, to the point where you're actually left with no feeling at all. So, I think what we call warm minimalism is where we strip all the clutter but we try to keep that emotional connection.

Would you like to tell us a bit more about the Olin tools? 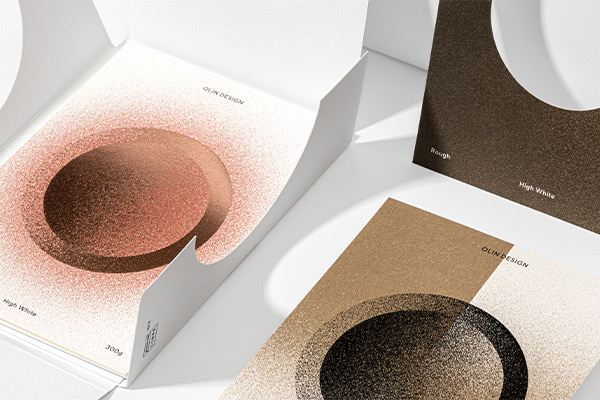 GR: Of course. On the outside, the pack is very minimal and clean. It's a black and white identity, with no colour, we wanted to make it about the paper, so you can focus on the tactility of it. But then when you open the pack, it just explodes with ideas and materials. All the content is a work of collaboration, with printers, with our art studio, it even came from physically making sculptures that were photographed and then converted into prints, using special processes. With this idea of a canvas, we also wanted the content inside to be able to change.

Did you work with any particular artistic influence in mind?

RR: One thing that we learned a lot from was a book we made for Michael Adams, an artist in the Seychelles who produces ultra-colourful paintings. He’s a very charismatic man, and he makes limited edition screen prints of his paintings. So, he's very used to working with highly specialised art screen printers that translate his paintings into print. When we came to make this book, he judged what we were doing as a reproduction of his work. The way he explained the importance of white was one of the most inspiring lectures on the meaning of colour I’ve had in my life. His critical eye for detail is certainly something we had in mind during the whole project.