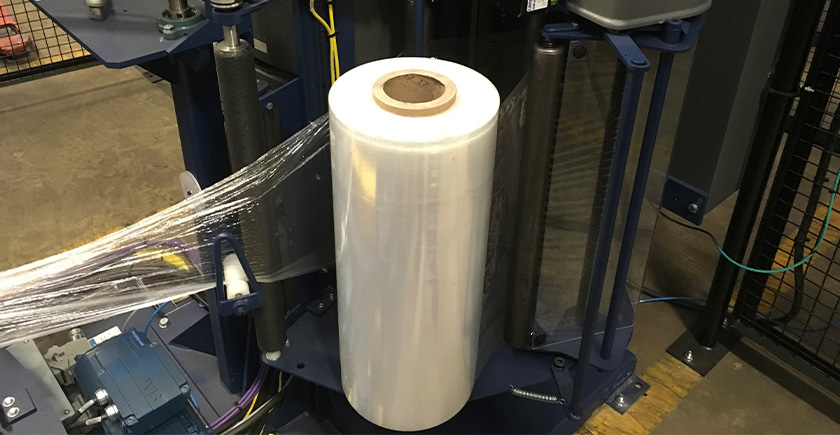 Environmental concerns, rising cost of raw materials and the impending Plastic Tax are making packaging and logistics companies think twice about their use of stretch film. But is it possible to cut the use of this warehouse staple?

Environmental concerns, rising cost of raw materials and the impending Plastic Tax are making packaging and logistics companies think twice about their use of stretch film. But is it possible to cut the use of this warehouse staple?

According to Antalis Packaging’s Machinery & Systems Operations Manager, Mick Carless, reducing use of stretch film is highly achievable, primarily because most businesses are using far more stretch film to wrap their pallets than is necessary. The good news is that with the right know-how and advice it is possible to make significant reductions in stretch film usage and associated costs. The key is identifying where the issues lie. Here, Mick reveals some of the most common causes of the over-use of stretch film:

While a machine can be calibrated to use a consistent amount of film every time, humans can be a little more fallible. To ensure a load is secure, it can be tempting to wrap an extra layer or two of film around the pallet, however, the reality is that using more film doesn’t make a load any more secure – it’s just wasted film.

Whether you think your operators are working at an optimum level or not, it’s also worth speaking to your film supplier to ask them to run a training session with them to refresh their skills.

Of course, there are many advantages of automating the process altogether. Health and Safety for example, employees tripping whilst walking or sometimes running around a pallet is a very real issue in the industry.

Other benefits of automation include an even load containment: it is very difficult for a pallet to be effectively and evenly wrapped by hand. Packaging waste: automated wrapping means film is dispensed evenly and consistently resulting in no wasted film, and finally automation gives better film economy. So, the overall result of automation is consistently wrapped pallets, reduced film usage, less damages and returns, and labour efficiencies - certainly, something Mick feels is worth considering.

2. Using the wrong type of film for the equipment

One of the biggest causes of using too much stretch film is mis-matched film and machinery. There’s no point buying the latest film on the market if your machine uses old technology. If a film isn’t capable of achieving the stretch a machine is calibrated for, it will snap, resulting in film being wasted. Conversely, if a machine isn’t able to stretch a film sufficiently, once it’s been wrapped around the load it will shrink back, causing corners or even whole loads to be crushed. To solve this issue, some packaging operations use corner protectors, but these are an additional cost that can be avoided if the right film for the machine is being used in the first place.

Regardless of the kit you are using, ensuring it undergoes a regular health check can pay dividends. As well as making sure all parts are in full working order, it’s important to check that the machine is calibrated to the film being used – calibration can slip as little tweaks are made in an attempt to solve a problem such as film snapping, although it’s worth emphasising here that few of these problems occur if the right film is being used in the first place.

4. Failing to base purchasing decisions on cost to wrap each pallet

Buyers under pressure to reduce costs of packaging materials can be tempted into buying stretch film based on price per tonne rather than how much it costs to wrap each pallet. With modern films becoming thinner, you get an awful lot more film per tonne but, because their cost per tonne is higher than lesser quality, thicker films, they can be passed over as too expensive. It’s important to ensure that film purchasing decisions are made with an understanding of the requirements of the machine and not in isolation.

Seek the advice of an expert

Whether you think you have an issue with your stretch film usage or not, it’s always worth asking your supplier to carry out a review. Antalis offers a consultation and audit where we will review your pallet wrapping process, machinery, and film before making recommendations as to any improvements that can be made – we have helped customers make savings of up to 70% in film costs and waste, bringing huge benefits to their bottom line and reducing environmental impact. Antalis can supply fully tailor-made solutions and quotations - and even forecast the reduction in costs and estimate when any investment will have paid for itself.